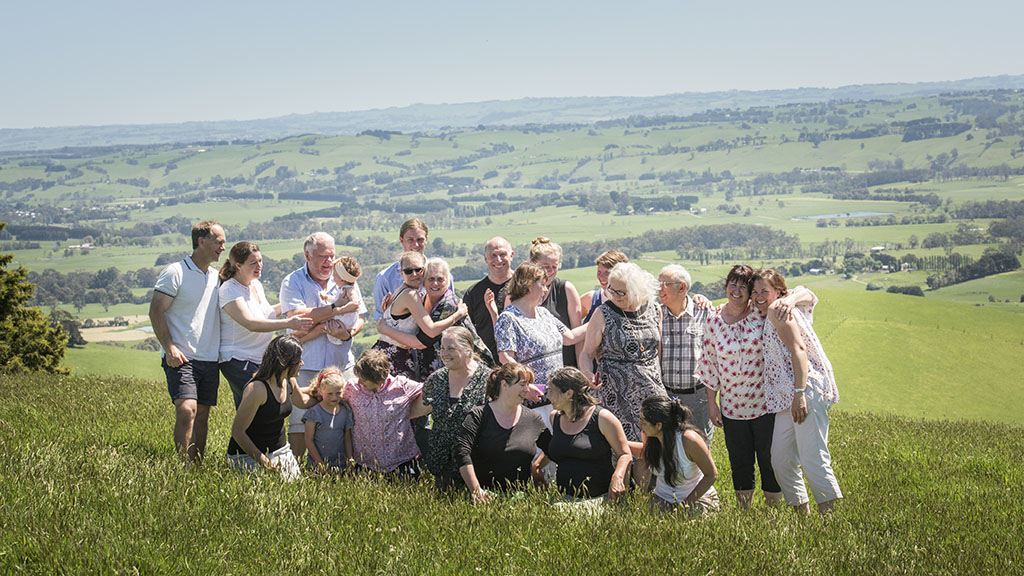 In 2017, a small group of organic and regenerative farmers met at the Blue Tree Honey Farm, in South Gippsland, with the idea of forming the Prom Coast Food Collective. In their first month, they were delighted to take $8,000 in sales from their fortnightly ‘convergence’ – a one and a half-hour event where pre-paid produce is collected at a carpark. Now, with a delivery service that extends State-wide, the collective, which includes over 30 organic and regenerative producers, averages over $20,000 weekly, 90% of which goes directly into the pockets of local farmers.

The Prom Coast Food Collective, which sells direct to consumers, is underpinned by a keenly-held mission to support fair food and farming which is regenerative and organic.

It is powered by leadership duo Sally Ruljancich and Amelia Bright, both small-scale farmers whose families are embedded in their local community.

Their undisputed dedication to the collective, particularly in its infancy, generated enough trust from farmer families that they were able to run the collective in an agile and dynamic way, without the usual cumbersome decision-making processes required of committees and shareholders.

“The collective is a living, breathing, ever-evolving thing,” says Sally. It shirks red tape and local government involvement in favour of creativity and autonomy. It takes up space in no-need-for-regulation areas in order to get a better deal for farmers and conscious consumers.

Sally explains, “Essentially, a convergence is a meeting of farmers with the consumers that have pre-ordered and paid for their orders. A traditional Farmers Market would need to go through Council. We operate on private property. There are no transactions on the day. It means that farmers aren’t driving back home with wasted produce. It is low risk, no waste. A model of collaboration.”

“We looked like a farmers market but didn’t act one. There was no feasibility study required. No marketing plan. All farmers, initially, kept 100 per cent of the takings.”

As a food systems advocate, academic, and co-founder of the Community Supported Agriculture (CSA) Network Australia and New Zealand, Sally saw potential for connecting conscientious consumers with producers to create a healthier local food system for all in her community.

Sally and her partner Colin are small-scale regenerative farmers who own a CSA-model business, Colin and Sally’s Organic Lamb and Beef.

All shares or subscriptions are sold at the beginning of the year – 2021 is already fully subscribed.

“I kept on having farmers sit in my kitchen asking me, ‘how do you sell out?’” says Sally.

“I felt that there was room in my headspace to collaborate – to give other farmers who were organic certified and regenerative the opportunity to sell direct to the community,” she says.

In early 2017, Sally met with community champion Bronwyn Davis and Amelia to identify the potential to revolutionise their local food economy. Five weeks later they organised their first convergence with a core group of local producers.

Orders are taken online, with all goods available to buy in a single checkout, with one payment. The order cycle opens on Wednesday each week at 12noon and closes each week on Monday 4pm. Orders are delivered the Sunday following. Community-supported software, created by the Open Food Network, is crucial to the whole system. The database has made it possible for the producers to upload their products themselves and for customers to pay in one transaction. Amelia and Sally split payments to producers.

The women believed that Open Food Network was their best option, particularly because all the producers would be in charge of their own back-ends – taking a lot of work away from Sally and Amelia. Once this was set up, all the producers are able to create a profile and upload their stock.

Home delivery model and evolving into a more sustainable model

In January and February of 2020, before the country had dreamed of toilet paper shortage hysteria, the Collective decided to trial home delivery which extended to Melbourne. “We delivered weekly and paid the packing and delivery team. We also added a few wholesale lines,” she says.

This required a warehouse and an increased level of support from Sally and Amelia who at that stage had been driving the operation for free.

“We rang the farmers to ask if they were willing to pay 10 per cent (to sustain the new model) – with 9 per cent to us (Sally and Amelia) and 1 per cent going to Open Food Network.”

“Then COVID happened – people were desperate for food and didn’t know how to get it – and it just took off. Over time all our farmers have helped to grow the brand and have wanted to work collaboratively on marketing through their channels.”

“I started this because I wanted an ethical supermarket for our family, I wanted to know the producers,” says Sally.

“Our goal was to offer a service that could replace the weekly shop. But we also knew that organic regenerative farming practice was key to good local food and we couldn’t justify compromising values for the sake of convenience.

“This required patience. At the beginning, we didn’t have access to local organic milk. There was nothing in the local market but we weren’t prepared to compromise on our principles of regenerative and organic.

“But eventually, we grew the growers. Build it and they will come. It took a little while but now that we have grown and shown value, we are able to grow the offerings.”

What is your business model? “We became an incorporated company for 5 minutes. It wasn’t for us”

According to Sally, running the collective without a committee came down to trust. “It came down to three years of producers seeing us spinning a million miles an hour and knowing we had their best interest at heart,” she says.

“For a while we weren’t anything. We were just people rocking up to a carpark. We then become an Unincorporated Company for about five minutes but it just wasn’t for us. The decision-making process was tiring. It wasn’t going to work if we wanted to keep our creativity and enthusiasm.

“We know our farmers and we know our community. We are confident making fluid decisions in their best interest. We want the creativity and flexibility to be able to make decisions fast for a dynamic business. If we were beholden to committees and shareholders, this could not be possible.

“Also, when there is no one holding you back, you have this opportunity to fail. We have been prepared to give things a go and it’s paid off,” says Sally

While Sally’s expertise lies in her communications and community engagement, she describes Amelia is the ‘Logistics Queen’. “She has come up with an amazing packing and tracking order system.

“We are so immensely different. And because of this we can both own our respective roles and there is so much respect for what the other one does.”

Amelia Bright, the Co-Owner of Amber Creek Farms won the 2018 Emerging Leaders in Victorian Agriculture (ELVA) award which was presented by The Royal Agricultural Society of Victoria (RASV).

No such thing as a free delivery

“It’s important to be transparent about the cost of delivery, which the customer pays for. I talk a lot about the fact that there is no such thing as a free delivery, because if there was that cost would be put back on the farmers. We make things transparent and fair.”

“Leave the drama to the actors; always offer help when you see someone in need; do what you say you are going to do; eyes on the prize. And at the end of the day, you have access to the best organic food ever.”