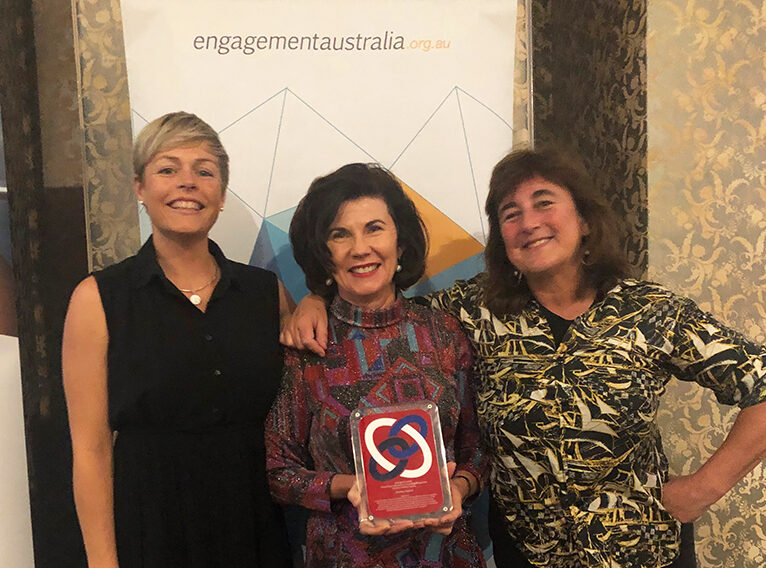 Tonight at the 2019 BHERT (Business Higher Education Round Table) Awards in Brisbane, the University won the Outstanding Collaboration in Community Engagement category.

For both awards, judges were won over by Farming Together’s demonstrated ability to harness collaboration for systemic change in order to address the unprecedented threat of increasingly volatile markets and extreme climatic conditions on Australian farmers’ livelihoods.

“As a progressive, public-purpose University that is proud of our impact agenda, these awards are further endorsement of our aspiration to be Australia’s Engaged University, where the opportunities for impact in our backyard are translated into solutions for the front yard and the world,” said Vice Chancellor Professor Adam Shoemaker.

During its two-year pilot period Farming Together delivered an innovative knowledge mobilisation model to 28,500 primary producers nationwide, unlocking the power of collaboration and empowering a generation of primary producers. The program offered on the ground support to advance farmers’, fishers’ and foresters’ projects and provided material and expert support on collaboration and co-operative structures. Judges noted it had exceeded targets for farmers by 300 per cent.

“Southern Cross University was brave to take on such a big project, but receiving two top national awards for engagement in the space of less than a week is testament to the real-world impact of this program,” said Lorraine Gordon, Farming Together Program Director.

The Farming Together Program was designed collaboratively with the farmers and primary producers that comprise the Northern Rivers Co-operative Alliance, whose members – such as NORCO – wanted to better advocate and support the development of more co-operatives and collaborative businesses across the agricultural sector in Australia.

“What emerged from that co-design was a program that focused on working collaboratively with farmers, starting with an assessment of their needs and an understanding on how to position expert support to build their farm businesses,” said Mr Ben Roche, Vice President of Engagement at Southern Cross University.

“Farming Together piloted a new model for developing the capacity of farmers to realise the benefits of a collaborative approach across and within the supply chain, building their resilience and ability to exert more influence on the development of their businesses.

“The program was overwhelmed with the demand for this form of support – which is particularly well suited to smaller and family farming businesses. It has demonstrated the power of collaboration – irrespective of the type of business – as a key to the future resilience of our agricultural sector.”

Ms Gordon, the 2018 Rural Community Leader of the Year, acknowledged the efforts of her team.

“Behind these wins is an awesome team that came from three states to help 28,500 farmers, fishers and foresters across every region of Australia, in every industry, to cope with what was coming — climate change and drought,” she said.

“Never before had Australian agriculture received such concerted national effort to connect its stakeholders. Through collaboration we’ve been able to set up these farmers to be resilient for the future, so I couldn’t be more proud this week to be part of Southern Cross University.”