Sheep folk are the most-flockable

Australia’s sheep, lamb and wool producers are the nation’s keenest to form collaborations, according to the national Farming Together program.

In its first 10 months, the campaign encouraging farmers, fishers and foresters to form groups has attracted more sheep, lamb and wool projects than any other commodity group.

Farming Together has had interactions with 700 groups representing more than 16,000 farmers nationally.

The Australian Government-supported program recently announced first-round funding of $4.5m to farmer groups. In addition, it provided the groups with independent expert advice valued at $550,000.

Farming Together program director Lorraine Gordon (pictured) said: “We had applications from groups across the country – both large and small. The large-scale commodity groups, like sheep, beef and cropping, predominated but we also had robust interest from smaller, emerging ag-commodities.

“We note a strong interest among organic producers and locavore co-operatives as well as fish and seafood groups.

“There is clearly an appetite for collaborative models across the nation’s primary producers. Farming Together is exactly the right program at the right time and in the right place.” 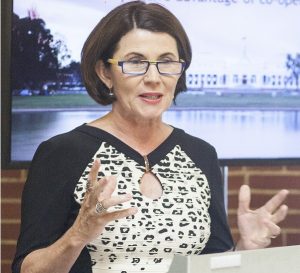