Create your own succession plan 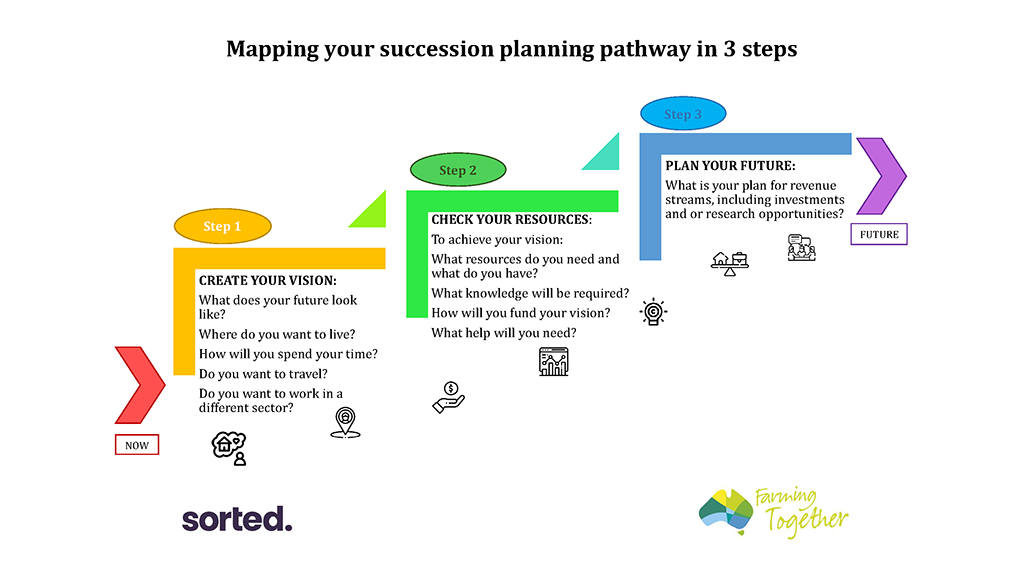 Create your own succession plan

In collaboration with the brilliant Clare Fountain from Sorted, Farming Together is pleased to present, The 3-Step Succession Planning Tool. This tool provides a step-by-step approach to mapping your future wants and needs and assist you in planning for you and your farm’s future.

This simple decision-making tool has been designed to support you to consider succession planning options. It starts with creating your vision, checks you have the resources required and enables you to identify the steps that can take you from where you are now to where you want to be. We recommend that initially you complete this activity individually/separately from your business partner/s then come together to create a shared future vision. There is no right or wrong here.

Question for reflection and consideration

If you step out of your business, does your farming enterprise provide enough surplus to cover the market wage for someone to step in and run the business on your behalf and provide a passive income to you as the owner? If the answer is no, and you’re looking to sell the business, you need to consider how ‘sellable’ and viable the business might be.

There are three case studies included here to give you some ideas about the different visions and how the succession planning process highlighted some lurking assumptions, expectations and misaligned visions and plans that can be rectified when identified early.

Case study 1: Katie and Hugh stayed on farm and set up a (few) new enterprises…

Katie and Hugh are orchardists who wanted to live on the farm but not work on the farm. They couldn’t see themselves moving to town and they loved where they live; this was their vision for the future. They thought about how they could generate income from the land while living on the land and not selling it. They realised they had built up a fair amount of intellectual property over the years in their knowledge about fruit farming and decided to start an online business educating people about growing high quality produce. When Katie and Hugh had identified this intellectual property as a potential profitable business, they went through a process to work out how much money they needed to live and how much could they generate. Katie’s dad, who originally owned the farm, was included in the conversation. They also came up with the idea of starting a co-operative and with four other businesses working the farm, so they have made a successful transition away from the hands-on work on the farm but have achieved their vision of living on the farm. Moreover, they love seeing the farm come to life with so many other farmers working their land.

Case Study 2: Kevin was a dairy farmer who wanted to take a holiday…

Kevin was a dairy farmer and had been working on the land as a 4th generation farmer on his family farm. There was no one else to work the farm and with the added pressures of drought leaving no water or feed, Kevin was stressed and heading for burnout. Kevin considered his future scape and decided he just wanted out and off the land. Kevin decided that selling up was his best option and he decided to buy an apartment in a rural centre to get some perspective. Kevin got an off-farm job and started doing the travel that he had always dreamed of.

Case Study 3: Phillip and Mary decided to sell-up and leave their farm…

Phillip and Mary were orchardists and diversified into value-add projects by making juice from the produce that was not at market quality standard. They were also conducting great land management practices. After ten years on the farm, they were still living in a small, converted shipping container while they saved up the funds to build their dream farmhouse. Phillip and Mary were reaching the point where they were ready to start considering their succession options. After going through the tool individually, it was identified that Phillip had a vision of wanting to stay on the land while Mary had a vision of wanting to live far, far away from the land. Adding to their decision-making process was the fact that Mary was becoming sick and tired of the housing arrangement and waiting for that day to come – and wondering if it every would! – when they would have enough money to build. So, after talking through their options about the future and clearly identifying their difference of vision, they got the point to visualise how their futures could work together. Mary wanted to live in a nice, proper house and Phillip wanted to keep working as an orchardist. They realised that the yield of their fruit would never be able to provide them with the revenue that they wanted for the return as it justified two people working full-time in the orchard.  After further discussions, they decided to sell their farm and Phillip went on to become an orchardist on another farm.

For more information, see the Planning for Success in Succession webinar or for a personalised consultation with Clare Fountain, contact Sorted.