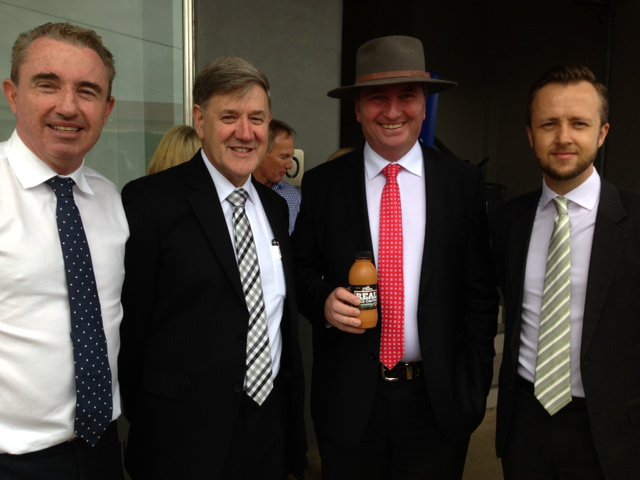 Farmers will be empowered to establish cooperatives and adopt innovative business models to boost their bargaining position in the marketplace under the Coalition Government’s $13.8 million Farm Co-operatives and Collaboration Pilot Program.

“This national pilot program is all about enabling farmers to come together, whether in co-operatives or less formal collaborations, and work to improve farmgate returns,” Minister Joyce said.

“Agricultural cooperatives allow farmers to own and control more of the food supply chain themselves—giving them greater bargaining power when it comes to negotiating with buyers of their produce.

“The further you reach down the supply chain the better returns received at the farm gate—it’s that simple. It’s better for the farmer, and it’s better for local communities and the people who live and work there.”

Minister Joyce said the Lismore based Southern Cross University was perfectly positioned to deliver the cooperatives pilot program nationally because of the experience, expertise and links built up over recent years through its partnership with the Northern Rivers Cooperatives Alliance and Regional Development Australia-Northern Rivers.

“The program has evolved since it was announced in the Agricultural White Paper last year as a result of consultation undertaken by Kevin Hogan with a wide range of stakeholders, including the cooperatives industry.

“Industry consultation identified the potential for improved long term benefits of developing a centre of excellence in collaborative business models that can leverage off national regional development and educational networks.”

“As a producer myself I understand farmers are price takers, not price makers,” Minister Nash said.

“This programme aims to give farmers tools to control their own destinies and could ultimately improve farmgate returns for farmers right across Australia.”

Mr Hogan said he was pleased the Government would partner with Southern Cross University to deliver the cooperatives initiative.

“I thank all those organisations across Australia who contributed to the consultation and had a very real part in improving the design of this pilot project.

“As a strong advocate for collaborative models that support small and family businesses, I am confident this initiative will help more businesses to succeed and grow jobs and the economies of regional areas.”

“The pilot program will deliver expert advice and information to up to 2,000 farmers and 100 farmer groups across the nation and will run until 30 June 2018,” Minister Joyce said.

“The program includes $3.8 million earmarked for new farmer group projects. Groups of farmers will be able to submit proposals for new collaborations to a panel of industry experts, with successful applicants receiving funding support and a dedicated case worker to get their project off the ground.”

Minister Joyce said in its recent inquiry into cooperative, mutual and member-owned forms, the all-party Senate Economics References Committee called on the government to encourage the establishment of new cooperatives and undertake a program of education about the role of cooperatives. This important program commences in a very positive way this task.

“This program is a great start to meeting that task, and a key part of the Coalition Government’s $4 billion Agricultural Competitiveness White Paper which is helping strengthen Australian agriculture.”